Dromedary and Bactrian camels are Old World species, with Camelus dromedarius being an animal of the Old World Arid Zone belt that stretches from Mauretania in the west to Rajasthans Aravalli Hills in the east, while Camelus bactrianus is a creature of the cold high-altitude deserts of China, Mongolia, Northern Iran and some other pockets.

In the 19th century, camels were exported to both Australia and North America, with very different results. Recently, I was fortunate to get some insight into the scenarios in both countries and am marvelling at the role of culture in determining the fate of an animal species.

My source of information for Australia is the reknown camel whisperer Paddy McHugh who stayed with us on our “camel farm” to demonstrate how to train camels without nosepegs (more about this issue at a later date).

Australia has a huge camel population in the Outback, numbering maybe around half a million head. These camels are considered a pest and invasive species (a concept a bit difficult to digest for us who try to save Rajasthan’s camel population)  and between 2009 and 2013 there was a government sponsored programme to try to eliminate the camel population by shooting the herds from helicopters – and leaving the carcasses to rot. Believe it or not, this A$ 19 million scheme was also justified with the need to mitigate climate gas emissions!

Now, according to Paddy, the environmental damage that the feral camels do is vastly exaggerated, mainly by the beef and sheep ranchers. I am sure they have their grievances, but – without having yet been to the outback – I am struck by the apparently amazing capacity of the camel to grow and flourish in such a hostile environment without any human inputs.  To me it seems that the Australian feral camels are amazingly efficient protein producers, and thus an asset in a food-insecure world. Isn’t it much better to produce animal protein for human consumption in this way, rather than in industrialized feedlots that cause huge pollution, require animals to be fed with antibiotics to keep them healthy and depend on vast monocultures of soybean and corn?

And mind you, it has been shown that camels emit less greenhouse gases than conventional ruminants, primarily because they need much less feed to produce protein. STRANGE that the animal science establishment that is so pre-occupied with “efficiency” of livestock has not latched on to this fact. But of course, it goes against the CULTURE of many people to consume camel meat instead of chicken or mutton, even if it makes utmost ecological sense.

In North America camels were also introduced but have not survived as a feral population. I have just come back from an amazing tour to California which was courtesy of the Rolex Awards for Enterprise and, as a budding camel dairy entrepreneur,  I used the oportunity to connect with the intriguing camel scene over there. The US has an emerging camel dairy industry, mainly to cater to autism patients, but also to health nuts, athletes, paleo-dieters, and sufferers of various diseases. My host  was  the lovely Christina Adams who pioneered the use of camel milk in the treatment of autism and is ne of the foremost authorities on this subject.

Together with Christina, I visited the Oasis Camel Dairy in Ramona run by a wonderful couple, Nancy and Gil Riegler, who own around 20 camels. 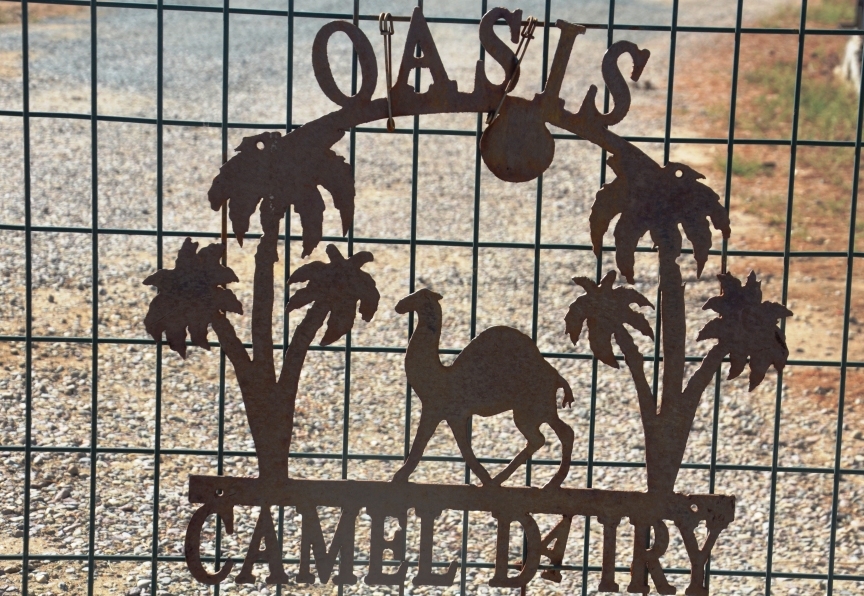 Because of the complicated legal situation, they currently are not selling camel milk, but use it to produce an array of luxurious body care items, including soaps, lotions, lip chaps, bath bombs, etc. They have just developed a lipstick based on camel milk of which they generously gave me a few samples.

Finally, I had an interesting conversation with Walid Abdul Wahab, the founder of Desert Farms,  who is applying his business mind to set up a global camel brand, sourcing camel milk from all over the world – not only from the US, but also Europe and Pakistan. He believes in camel milk powder which is of course much easier to handle as it stores almost indefinitely and can easily be shipped. But does camel milk powder have the same beneficial and therapeutic qualities as fresh camel milk? I am wondering about this and would like to see some research and data on the question. I am also wondering about the desirability of establishing one global brand for all. While its true that camel milk producers have problems marketing milk on their own, I will continue to dream of, and pursue, a diverse camel milk sector where each camel milk has its individual taste and speaks for its region, just like cheeses and wines do!

3 Replies to “Old World Camels in the New World”