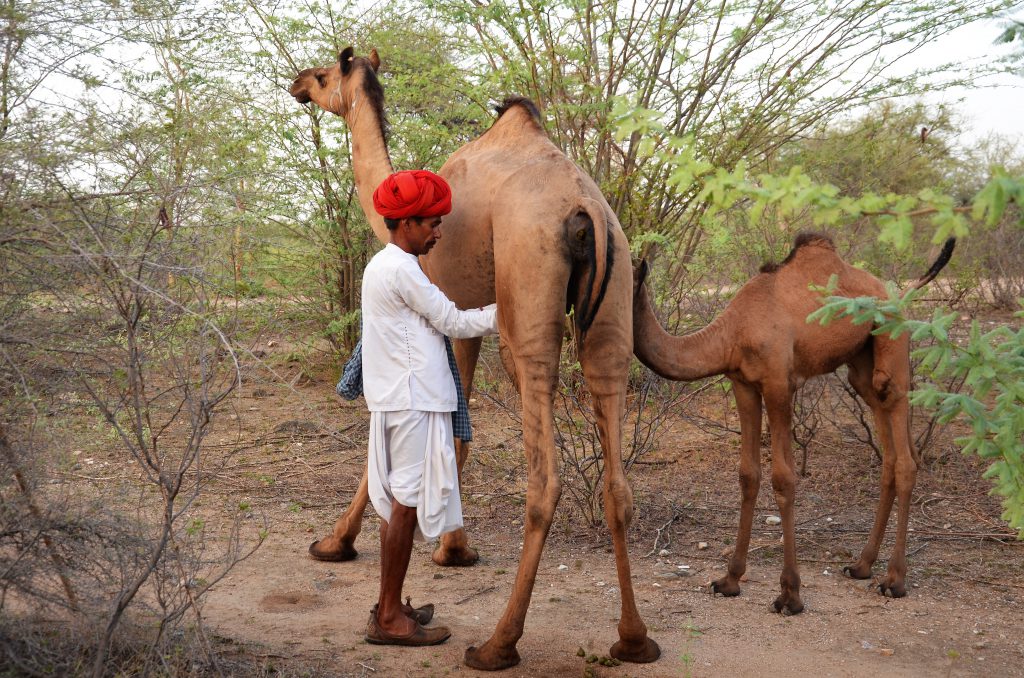 Nomadic camel dairying: a system in which milk is shared between humans and calves.

Its World Camel Day on 22nd June and therefore time for an ode to this animal that is the product of ancient nomadic cultures, but rapidly accumulating admirers and supporters in the North.

I won’t bore you with the known and scientifically proven facts about camel milk and its therapeutic value for a range of “modern”, lifestyle diseases. After all, they are all over the place, hyped by a global, very active network of camel lovers, camel dairy entrepreneurs (of which I am one), and people who have experienced dramatic health improvements after they started consuming camel milk. Compatible with lactose intolerance, helpful for diabetes patients by reducing need for insulin injections, often beneficial for certain types of autism, are some of the well-established facts. (Contact me if you need references)

For me the wonder of the camel is associated with its nomadic origin in the vast deserts of the Arabian peninsula: Its ability to convert extremely spiky, thorny and fibrous trees or scant widely dispersed ground vegetation, sometimes with an extremely high salt content, into a delicious elixir that is ideally positioned to address the needs of the times. Here are the three points that need to get more attention in  future research and work on camels:

At the beginning of the camel dairy system are, in my nook of the world in Rajasthan: Extremely drought resistant trees and shrubs with deep roots that enable them to withstand years without rainfall. These trees, such as this Acacia leucophloea, are used in ayurvedic medicine, and full of phytochemicals and micronutrients absent from modern diets.

The emerging camel dairy sector should carefully avoid  the pitfalls of conventional dairying, such as hyper-bred cows needing expensive feed, throw away male calves, exploitation of farmers, and dismantling of milk into its constituent parts. Camel dairying must remain a system based on nature in which camels harvest leafs and pods of wild plants and convert this biodiverse biomass into a powerful, entirely naturally health elixir.  In start-up speak, camel dairying is a system to disrupt conventional practices and approaches to dairying.

With average temperatures inching up annually in the already hot parts of the world, no other animal is as well positioned to support dryland food production (“adaptation”). Camel milk production requires less fossil fuels than cow milk production. What other food producing strategy do you know that makes do without the plough, fossil fuels, fertilizers, harvesting machinery? And it is worth mentioning (although this part of the anti-livestock story is being debunked now) that they emit less methane than cows, maybe also because of their diet high in tannins (“mitigation”).

Is it the high amount of GABA in camel milk that gives it that chilling, relaxing effect?

Camel milk is good for your health, but from personal experience I feel it is not just about physical health but about something more: about peace of mind! Drinking fresh camel milk is almost intoxicating:  It helps you relax and focus.  It’s the perfect antidote for a hectic, constantly on-line, multi-tasking lifestyle. Its grounds you.

The scientific explanation for this might be its high content of  GABA (Gamma-Amino-Butyric Acid), a substance that blocks neuro-transmitters and reduces the number of neurons firing in the brain, thereby promoting relaxation, sleep and easing anxiety.

Apart from that I feel it helps you cope better with heat – which would only be logical. And a new research hypothesis holds that it can help your body dealing with air pollution. More about that hopefully soon.

Try it out – camel milk puts you into a Sufi mood!