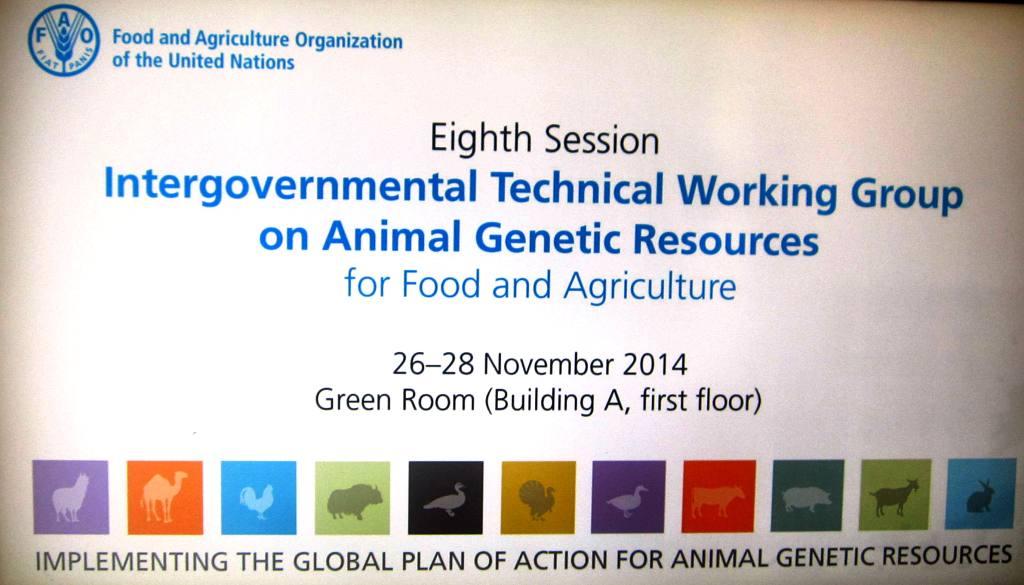 During the eighth session of the Intergovernmental Technical Working Group on Animal Genetic Resources (ITWG-AnGR 8), the confusion of delegates about how to apply the concept of “Access and Benefit-Sharing” to animal genetic resources (AnGR) was palpable. Developed countries such as USA and Canada argued that nothing should interfere with the free flow of AnGR. Of course they have the interests of their genetics companies in mind. Developing countries such as Bolivia expressed their fear that the indiscriminate import of exotic breeds destroys their locally adapted ones. There is also the latent fear of biopiracy especially of climate resilient local breeds, although at a side-event by WIPO and FAO about the patent landscape in the livestock sector it was stated that there have been no patent applications on genetic material from any indigenous breeds.

Francois Pythoud from Switzerland argued for brainstorming the issues and “thinking out of the box”, but unfortunately nobody picked up the suggestion. LPP and LIFE Network tried to make the case for community protocols, but this elicited neither any response nor support despite a side-event on the previous day that sought to bring across the point  that locally adapted breeds are often low-input and high output. And that this can be made visible by means of the Community Protocols that feature importantly in the Nagoya Protocol on Access and Benefit-Sharing that recently entered into force.  Our side-event was chaired by Poland’s National Coordinator, Dr. Elzbieta Martyniuk and featured presentations by Elizabeth Katushabe of Uganda about community documentation of Ankole Longhorn Cattle, by Rao Abdul Qadeer from Pakistan about the significance of Pakistan’s genetic resources for the camel dairy industry in the Gulf countries and by Dr. Maria Rosa Lanari of Argentina on the low-input but high-output indigenous livestock production systems of Patagonia.

In order to move forward, I think we really need to get back to the basics and remind ourselves of the rationale of Access and Benefit-Sharing in the first place: to provide positive incentives for the conservation and sustainable use of biodiversity. Now, in the case of AnGr, it is quite clear that there is currently not much of a commercial interest in locally adapted AnGR because they do not really fit into the industrial systems for which the genetics companies work. On the other hand, it is just the spread of industrial systems that poses the danger to livestock biodiversity as they contribute to the destruction of native livestock based food production systems – which are often much more productive than is evident, or worse: which have never been documented and remained invisible.Thus the community protocols that are mandated by the Nagoya Protocol have an extremely important role to play in changing perceptions about local systems and providing at least moral support and empowerment to the local livestock keepers that continue to be the backbone of food production in many countries.

2 Replies to “Animal genetic resources and “Access and Benefit-Sharing”: not made for each other?”

I am very excited to share that my new book 'Hoofprints on the Land. How traditional Herding and Grazing can restore the soil and bring animal agriculture back in balance with the Earth' will be published on 5th January 2023 by Chelsea Green Publishers. You can pre-order it from Amazon and Barnes and Noble.